Zara works with adopted teens songwriting, teaching them how to write a song, and focusing on lyric writing and singing by the end of each workshop once the song is complete there is a performance to the parents.

July 6, 2020 | by Danny Neill Zara Phillips – Meditation and KitKats Independent – Out Now Zara Phillips has been quietly developing a music career for more than thirty years now, alongside pursuing many other creative and artistic endeavours. Her entry point musically was very much through the mainstream arena, working as a backing vocalist first for Bob Geldof as he launched a solo career before joining names like Matt Bianco, Nick Kamen and David Essex.

July 6, 2020 | by Danny Coleman “Meditation & KitKats did you see the cover? I was thinking to myself if somebody had asked me about all the songs my response would be, they’re really just about the last few years of my life and how I’ve gotten through life. An if somebody said, ‘How have you gotten through your life?’ I would say meditation and Kit Kats because to be honest, some days I’ve meditated and I’ll be Zen and other days I’ve been eating Kit Kats all day,” said Zara Phillips, laughing as she discussed her new album, the trials, tribulations and heartaches of being adopted, her producer Richard Thompson and more. 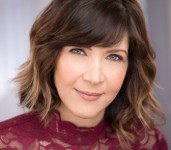 By: Robert Dye, Americansongwriter.com – May 8, 2020   Singer/songwriter Zara Philips has quite the backstory. Born in the UK, adopted, moved to the US, continually searching for her Italian birth father only to find him later in life a few miles from her home in New Jersey. A backup singer who found herself touring with Bob Geldof in the ‘80s, Phillips is finally coming into her own with her new album Meditations & Kit Kats, which includes the single “Perfect Strangers” premiering here with American Songwriter.

May 3, 2020 | Jim Bessman | Centerline True, the title and cover of singer-songwriter/author Zara Phillips’ latest album Meditation & KitKats is funny indeed, what with her assuming a classic cross-legged meditation pose—except that both hands hold KitKat candy bars upright, empty wrappers strewn all over the floor before her.

By: CINDY STAGOFF on njarts.net | April 27, 2020 Singer-songwriter and author Zara Phillips reveals a righteous and emotive voice on her Meditation and Kitkats album, which will be released on May 8 via CD Baby on various streaming platforms. Recounting her journey of growth through childhood, addiction, recovery, parenting and divorce, and reflecting on living as an adoptee, she stays optimistic. Even at the saddest moments, “life can also have joy and happiness,” she said in an interview.