From her auspicious debut, singer-songwriter Zara Phillips has led a charmed musical life. Her engaging and confident style combines strong lyrical themes with powerful melodies to create music that is both thought provoking and entertaining.

Zara Phillips began her professional career working as a backing vocalist for Bob Geldof. Live-Aid creator Geldof recruited Phillips for his first solo projects after he departed the chart-topping UK band The Boomtown Rats. She worked on Geldof’s album “Deep in the Heart of Nowhere,” music videos and television appearances on some of the U.K.’s most highly rated programs. She also toured extensively with Geldof.

Zara’s musical career quickly blossomed from that point. She continued her work on tour, in television and videos with U.K. artists such as Matt Bianco, Nick Kamen, David Essex, and the solo project from Dire Straits’ John Illsley. Additionally, she toured in support of Bananarama, with a ‘Perfect Day’.

Born and raised in London, Zara loved to sing and dance from a young age and enjoyed spending hours in her room writing all the lyrics to musicals and performing each part. She auditioned for school shows but was told her voice was too deep and never got the leads. A boyfriend persuaded her to join a band and soon started playing gigs around London. She also started tinkering with the guitar, asking any musician she knew (including Geldof and Illsley) to teach her a chord.

Zara moved to Los Angeles where she continued writing new songs and performing solo. In 2005 Zara finished work on a new CD entitled “When the Rain Stops” produced by Ted Perlman, winner of 2006 Grammy Award for Burt Bacharach’s CD “At This Time”. Zara’s work with Ted features 14 original tracks written by her (one track is a co-write with Ted) and was released in 2006.

Zara’s deeply personal song “Secrets” was used on the Emmy Award winning Daytime Soap, NBC’s “PASSIONS.” Two other songs, “My Time” and “Naked Loving You” both are heard on the soundtrack for upcoming films from Organic Digital Productions.

In 2008 Zara finished directing and producing an adoption documentary entitled “ROOTS: UNKNOWN” This educational and informative film focuses on the emotional influence adoption has on the adoptee and their families. Interviews and sound bites with adult adoptees, their families and children are mixed with artistic images of their art and creative expression. The film won Best Homegrown Documentry at The Garden State Film festival in New Jersey.

In addition, Zara is also an author. Her book, ‘Mother Me’ is about Zara’s personal journey to motherhood from an adoptee’s point of view. ‘Mother Me’ was published by BAAF (British Association for Adoption and Fostering) in the UK and was released on March 3rd 2008. This is an intensely personal and compelling memoir in which Zara describes her feelings  as an adopted person and explores her relationships with her adoptive and birthmothers, and invites the reader to join her in her own journey to becoming a Mother. “It seems that birthing my children was also a birth for my whole self.”

“Mother Me’ was picked up by Gemma media and an updated version was released on February 14th 2011 in the U.S.A.

Zara and Ted Perlman got back together to record a new album “You, Me and Us” that feature’s  ‘I’m Legit’ a song  Zara wrote with another adopted person Darryl Macdaniels of DMC. The record, digitally released in 2011, has been a big hit within the adoption community. Songs from this album can be heard on Passions and Hollywood Heights.

This album is a collection of thought provoking songs with an acoustic and raw feel. The album ‘You, Me and Us” is available now.

“Beneath My Fathers’s Sky“, a one woman show that Zara wrote and performs in, is the winner of Best Direction at NYC United Solo festival in 2014 was also performed in LA, San Francisco, Connecticut, and in London in 2016 “upstairs at The Gate.”

In the past, Zara has facilitated adoption /addiction workshops with adopted families and the mental health professionals.  She engages the teens to create songs about their experience. 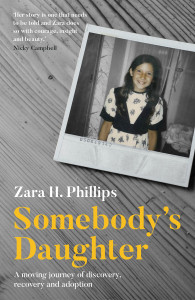 Zara’s new book “Somebody’s Daughter”, published by John Blake/Bonnier Publishers, was relased February 2018 in the UK and August 2018 in the USA.  More information to come about this moving journey of discovery, recovery and adoption.

Since the book’s release, Zara is back to music with Richard Thompson singing harmonies with him at solo and band shows. He also produced and arranged her new CD.  “Mediation & KitKats”, now out on all streaming platforms (iTunes, Spotify, Amazon Music etc.), is her first CD out in a few years.  Her songs describe the complexities of relationships, finding oneself and  explore the theme of connection and healing.

For hard copy of CDs, please email phillipszara4@gmail.com as prices are changing with postage.